In 2013, Andy Townsend’s work ethics, expertise, and passion for football became the driving forces behind the pursuit of his goal for that year – it paid off.

Andy’s determination carried the team through the ups and downs of the season. His Master’s degree in coaching from Greenville University is how he knew what to do on the field.

He applied the lessons he learned during his years of education. Andy also relied on his coaching experience to guide his football team. 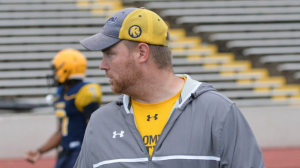 Townsend was an offensive line coach for the A&M team, but his love of football did not start there. Andy Townsend participated in the game of football before he ever coached it.

Andy Townsend football coach was a football player on his high school team. It was not long before he experienced his first taste of football success. In 1998, a teenage Andy Townsend became a state champion at Paul Pewitt High School.

The following year, Andy decided to turn his football uniform in for a coaching one.

Townsend became the video coordinator and offensive line coach at East Texas Baptist University. For Andy, this was the start of something exciting and new.

Andy Townsend football coach liked his new role and was good at it. It was this point in Andy Townsend’s life that kicked off his football coaching chapter. It is a significant part of his fourteen-year long career.

Andy Townsend football coach enjoyed coaching football so much that he continued down that path. The switch from playing football to coaching led to him bringing West Texas A&M to the regional finals.

Andy’s current role has him moving in a new, but still football-related, direction.

It has been almost a year since Andy Townsend started down this new path of his football career. Today, Andy is the Assistant to the Directors of Operations at the Alliance of American Football.

Connect with Andy Townsend on LinkedIn: